I know absolutely nothing about Grand Rapids, Mich., but how do you get a whole city to shut down and a major chunk of the population to film a continual music video?

(I saw Don McLean perform this in a solo acoustic show but it’s been so long, I can’t remember where or when. It was either about 30 years ago in Florida or about 25  years ago in Kentucky. But it sounded exactly like this, complete with the audience singalong. I can’t believe “American Pie” is 40 years old. And I can’t believe I’m so old that I’m now reminiscing about things that happened 30 years ago.)

That’s from the documentary “Standing in the Shadows of Motown.”

Herman Cain, one of the declared candidates for the 2012 GOP presidential nomination, said this:

“Because that’s when it says when any form of government becomes destructive of those ideals, it is the right of the people to alter or abolish it,” he added.

Cain needs to reread the Constitution. Why is it these Tea Party patriots throw the Constitution in your face when they’re trying to make a point, but end up quoting the wrong piece of parchment? What Cain is talking about is the Declaration of Independence, a completely different document written 11 years earlier.

And why is it Tea Baggers harp endlessly on the need for today’s laws to be in adherence with what the founding fathers intended?

Thomas Jefferson, the writer of the Declaration of Independence and one of the founding fathers, wrote this:

I am not an advocate for frequent changes in laws and constitutions. But laws and institutions must go hand in hand with the progress of the human mind. As that becomes more developed, more enlightened, as new discoveries are made, new truths discovered and manners and opinions change, with the change of circumstances, institutions must advance also to keep pace with the times. We might as well require a man to wear still the coat which fitted him when a boy as civilized society to remain ever under the regimen of their barbarous ancestors.

Contrary to what this may sound like, I don’t spend countless hours poring through American history books looking for obscure quotes to show that Tea Baggers and the Republican politicians who enable them haven’t the slightest idea of what they’re talking about. I rode my bike over to the Jefferson Memorial today. That quote is written on the wall. 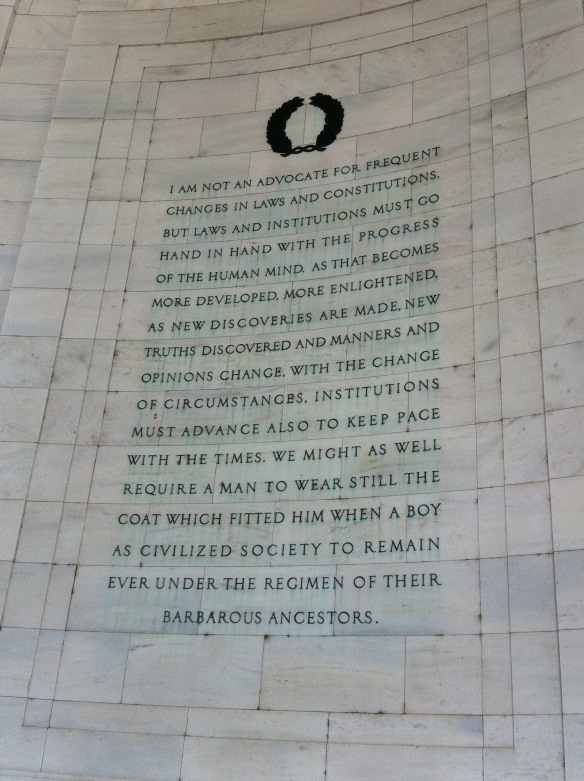 There have been a rash of post-election withdrawal symptoms involving recently elected GOP governors, where we’re getting a barrage of opinion polls that are telling us things like this:

Only three months removed from Governor Rick Scott‘s (R) inauguration, a majority of Florida voters now say the state is headed in the wrong direction and that, if they could do it all over again, they wouldn’t have elected Scott in the first place, according to a new Suffolk University poll.

Two months into his first term, a new poll shows Wisconsin voters are unhappy with GOP Gov. Scott Walker–and would send him packing if they were given a do-over of the 2010 election that sent him to the statehouse in Madison.

Since signing a bill earlier this year to strip public unions of most of their collective bargaining rights, Ohio Gov. John Kasich‘s (R) approval rating has plummeted, bottoming out at a new low in a PPP poll released Wednesday. As if that weren’t bad enough, the poll also found Kasich losing a theoretical do-over election — by an enormous 25-point margin.

These polls are short-term revelatory and long-term meaningless. Are people in Florida and Minnesota and Ohio are pissed off because they didn’t pay attention to the issues in those campaigns?  Were they conned by the specter of forged presidential birth certificates, a secret Muslim intrusion in the White House and death panels discreetly hidden in a universal health plan? The voters went off in a Tea Party snit and voted in conservative Republicans who — surprise, surprise — are doing what conservative Republicans would obviously do.

So why are these voters whining now? The argument, “We never expected these guys to do what they stand for” doesn’t wash.

Elections aren’t like videogames. When you screw up, you can’t just hit a reset button and start over like nothing bad happened.

In a videogame your player goes into war and steps on a land mine, or drives a car at 200 miles an hour and smashes into a wall, or goes too far in a hop and ends up falling off a cliff. Then you get another life: You resume where you got killed and keep going until you use up all of your lives.

Elections are real life. In real life, when those things happen, you die. Game Over.

So after less than six months, the citizens of these fair states decide they made a mistake and want a do-over. When you elect a governor, you’re electing someone who’s going to be in office for four years. Every politician knows that when you have that kind of time, you ram your most controversial and distasteful programs down the public’s throat immediately, because voters have short attention spans. The traumas of the first six months are often forgotten when the next election season begins three and a half years later.

If voters don’t like what’s happening in their states, maybe it’s time they think about getting an attention span. Instead of them being distracted by shiny objects (Oh, this health care debate is too complicated and … ooh! Lindsay Lohan just got arrested again!) they need to examine the issues,  figure out what’s really in their best interests, cast their votes and deal with the consequences.

Stop acting like life is a game of Super Mario, already.

When you’re very rich, and a New York judge puts you under house arrest as you await trial for a serious felony, this is the kind of place you have to live in.

Click the link and get a video tour of Dominique Strauss-Kahn’s new living quarters, uploaded by NBC New York. Sure beats a cell in Rikers Island. Hell, sure beats a house in the suburbs.

Fox News didn’t get rid of Mike Huckabee around the same time, because it determined he wasn’t going to run for president mostly because he didn’t want to give up the big paycheck Fox was giving him. In fact, Fox gave him a deadline to find out what his intentions were.

Fox News still has Sarah Palin. The half-term governor has already shown she’s more interested in getting a big paycheck than having to work at governing. Fox News gives her a big paycheck. That indicates she isn’t going to run for president.

We’ve had to deal with Republican meltdowns over Obama’s use of teleprompters and Obama’s birth certificate.

President Obama’s use of a mechanical “autopen” to sign the new PATRIOT Act extension from abroad has at least one Republican lawmaker worried about a “dangerous precedent.” According to Rep. Tom Graves (R-GA), using a machine to sign legislation could one day bring about a dystopia in which robotic writing utensils are used to enact all manner of phony legislation.

“I thought it was a joke at first, but the President did, in fact, authorize an autopen to sign the Patriot Act extension into law,” Rep. Tom Graves (R-GA) said in a statement. “Consider the dangerous precedent this sets. Any number of circumstances could arise in the future where the public could question whether or not the president authorized the use of an autopen. For example, if the president is hospitalized and not fully alert, can a group of aggressive Cabinet members interpret a wink or a squeeze of the hand as approval of an autopen signing? I am very concerned about what this means for future presidential orders, whether they be signing bills into law, military orders, or executive orders.”

The autopen was invented in 1804. Graves looks like he’s 30 years old. When I worked in state politics more than 30 years ago, the governor’s office had an autopen. Safe to say the president had an autopen, too. Safe to say a lot of presidents had an autopen before that. And before the autopen, congressman, they had this thing called a rubber stamp done in the form of the politician’s signature.

Are we really going to go through another round of faux outrage from the GOP? Can’t someone just give them a lifetime supply of smelling salts? I’ve never seen a political party succumb to the vapors as much as these guys do.

The Dutch government on Friday said it would start banning tourists from buying cannabis from “coffee shops” and impose restrictions on Dutch customers by the end of the year.
The Netherlands is well known for having one of Europe’s most liberal soft drug policies that has made its cannabis shops a popular tourist attraction, particularly in Amsterdam.

Backed by the far-right party of anti-immigrant politician Geert Wilders, the coalition government that came into power last year announced plans to curb drug tourism as part of a nationwide program to promote health and fight crime.

“In order to tackle the nuisance and criminality associated with coffee shops and drug trafficking, the open-door policy of coffee shops will end,” the Dutch health and justice ministers wrote in a letter to the country’s parliament on Friday.

Under the new rules, only Dutch residents will be able to sign up as members of cannabis shops.

Dutch customers will have to sign up for at least a year’s membership and each shop would be expected to have only up to 1,500 members, a justice ministry spokesman said.

The policy will roll out in the southern provinces of Limburg, Noord Brabant and Zeeland by the end of the year and the rest of the country next year, the spokesman said.

Amsterdam, home to about 220 coffee shops, is already in the process of closing some in its red light district. Some officials have resisted the measures, saying they will push the soft drug trade underground.

(Just joking with the headline. Holland is a beautiful country. Once they write off the far right, things will return to normal. But the reality is a far right politician in the Netherlands is a Blue Dog Democrat in the U.S.)