Haven’t we had enough of Rick Perry? The guy has no idea what he’s talking about:

As he railed against “activist” judges, Texas Gov. Rick Perry slipped up on not only the name of one of the Supreme Court justices but also on how many sit on the bench.

“When you see his appointment of two, from my perspective, inarguably activist judges whether it was …” Perry said in the Des Moines Register editorial board meeting, pausing for six seconds. “Not Montemayor …”

“Sotomayor,” a member of the editorial board interrupted.

“Sotomayor, Sotomayor,” Perry said. “And Kagan are both activist judges.”

Monte Mayor, as those who live in Rick Perry Land know, was the host of “Let’s Make a Deal.” Who wants a judge who’s going to trade all your rights away for what’s behind Door Number 3? (And did you know Door Number 3 is an ad agency in Texas?)

And what’s worse, there are so many of those deal making judges on the Supreme Court:

Shortly after this flub, Perry referred to ”eight unelected” judges when discussing who should decide whether prayer is allowed in schools.

“For Washington to tell a local school district that you cannot have a prayer and a time of prayer in that school is, I think, offensive to most Americans. I trust the people of the states to make those decisions. I trust those independent school districts to make those decisions better than eight unelected, and frankly, unaccountable judges,” Perry said

But there are nine Supreme Court justices, not eight.

In Rick Perry Land, there are eight. Their names are Roberts, Kagan, Clarence, Montemayor, Grumpy, Dopey, Doc and Bashful (That Doc, he’s the smart one).

Perry should just stick to gays and Christmas. And as the guys on “Project Runway” will tell him, he needs to get rid of that “Brokeback Mountain” jacket when he’s talking about gays. 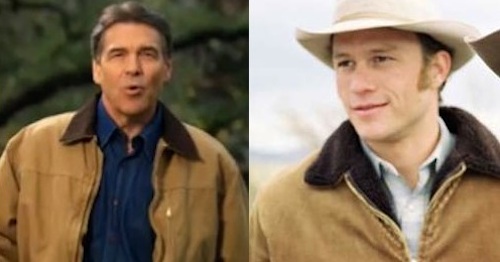 Are there still any Republicans taking him seriously? You’ve got to think that even now in Texas, there are second thoughts about the governor who’s served the longest in the state’s history. This also shows journalism in Texas must be horrible. How could he have gotten away with knowing so little and not being exposed in his first term?