The first confirmed case of Ebola in the United States was reported today in Texas. Time to pay attention (Via Vox).

And yes, it did not come in through Central American refugee children as your friends at Fox News were fear mongering a few weeks ago. It came from Africa, where it always has been.

If it’s in America that means it’s in other places we don’t know about yet. But for now, here’s your world Ebola map. 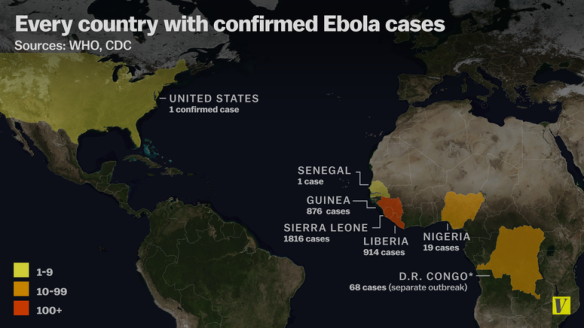 Teddy Bridgewater had a great day in his first start as the Minnesota Viking’s quarterback:

Teddy Bridgewater passed for 317 yards and a key two-point conversion before leaving with an ankle injury, and the Minnesota Vikings beat the Atlanta Falcons 41-28 on Sunday.

The rookie was 19 for 30 with no turnovers and ran five times for 27 yards and a score in his first career start.

He hurt his ankle late in the game, but tests were negative and he looks good to go Thursday, when the Vikings meet the Green Bay Packers.

I will be tuned into CBS.

A couple of years ago, I had a post on the Miss America pageant, where I was sort of perturbed about the amount of money the pageant said it awarded to the winner.

I’m sure there are lovely prizes, but here’s what gets me. There’s a scholarship involved, and according to news reports, Miss America’s scholarship prize is  $50,000. I know that $50,000 is a lot of money, but as the parent of a child in college, I also know that $50,000 isn’t going to cover costs over the four years it takes to graduate.

It seems like a minor complaint, but let’s break it down in terms of how the real world works.

About a week ago, John Oliver took a look at the Miss America pageant, and he’s sort of perturbed about the amount of money the pageant said it awarded overall:

I made my calculations on the back of an envelope. He called the IRS. That was impressive.

And he’s right about Donald Trump.

We’ve launched a war against Islamic State, and it seems like we’re always at battle, but this chart is surprising (Click to enlarge, via Vox):

Fewer people are dying in war than ever before.

It’s amazing, but given all of the horrors we read about every day, current world conflicts are nowhere near as deadly as those of the past on a per capita basis. According to Harvard Professor Steven Pinker, writing in The Wall Street Journal:

Since 1946, several organizations have tracked the number of armed conflicts and their human toll world-wide. The bad news is that for several decades, the decline of interstate wars was accompanied by a bulge of civil wars, as newly independent countries were led by inept governments, challenged by insurgencies and armed by the cold war superpowers.

The less bad news is that civil wars tend to kill far fewer people than wars between states. And the best news is that, since the peak of the cold war in the 1970s and ’80s, organized conflicts of all kinds—civil wars, genocides, repression by autocratic governments, terrorist attacks—have declined throughout the world, and their death tolls have declined even more precipitously.

The rate of documented direct deaths from political violence (war, terrorism, genocide and warlord militias) in the past decade is an unprecedented few hundredths of a percentage point. Even if we multiplied that rate to account for unrecorded deaths and the victims of war-caused disease and famine, it would not exceed 1%.

Pinker’s explanation for the transition to piece is worth reading, but contrary to what we perceive, the world is a lot more peaceful.

That’s not to say there aren’t dangerous people out there who think the way to achieve their goals is to kill everyone in sight. But institutionally and on a global scale, we’re not the blood thirsty savages we think we are.

Hopefully, we can do better.

This is happening in Wisconsin:

An armed militia group in Wisconsin plans to confront people who signed the petition to recall Gov. Scott Walker (R) at the polls on Nov. 4.

The “Wisconsin Poll Watcher Militia” will check the names of those on the petition and will then seek out the Democrats on that list, according to Facebook exchanges viewed by Politicus USA.

Anything else we need to know about these clowns?

… The Facebook page for the group featured pictures of African-Americans, but the group denied that they are targeting blacks.

“We can assure you that we will be targeting all democrats, not just black ones,” a Facebook message read, according to the Capital Times. “If you think we meant blacks only it is because you are a racist who thinks the only people with warrants are black. We know better because we have a nice list of people who are wanted democrat activist types. Most are actually white. We will target everyone.”

Good to know they’re equal opportunity scumbags. At some point, these tea bagger terrorists are going to shoot someone and hide behind a stand your ground law.

An interesting little science fiction film that gets pretty racy at the end. In Spanish with English subtitles.