NASA posted the photo above on Friday, following news that Leonard Nimoy passed away in Los Angeles at age 83. The photo shows NASA officials and “Star Trek” cast members standing together in 1976 in front of NASA’s space shuttle Enterprise, named for show’s iconic spacecraft.

As Star Trek’s Vulcan science officer Mr. Spock, Nimoy was an inspiration for many at NASA. He often joined other cast members in at NASA special events and promoting NASA missions, as in the photo above.

Captain Kirk was probably off cavorting with some space babe.

One of the things I remember about Leonard Nimoy was that through the character Spock, he made intellectualism and logic seem cool. He’s been Spock forever (or for those who’ve lived long enough, since 1966) and in the course of Star Trek history, Spock has lived, died, been reborn and was the reason for a time line that last had him consulting with his younger self.

As Spock would say, “That is illogical,” but we accepted it because in science fiction, no one ever dies.

Spock joins Bones and Scotty in the reality afterlife (Deforest Kelley died in 1999. James Doohan died in 2005.) But they live forever in our television and film libraries.

(I won’t get into the “In Search of …” series, or his role as Paris in “Mission Impossible.”)

Let’s end this with a “Spock off”:

This is from a couple of months ago, when a bunch of kids got  together and learned some Led Zeppelin.

The Louisville Leopard Percussionists is a non-profit organization offering extracurricular music opportunities to local children at little or no cost. Please help us keep our program going by donating at http://bit.ly/louleopardsdonate.

Some 12.8 billion light years away, astronomers have spotted an object of almost impossible brightness — the most luminous object ever seen in such ancient space. It’s from just 900 million years after the big bang, and the old quasar — a shining object produced by a massive black hole — is 420 trillion times more luminous than our sun.

That brightness and size is surprising in a black hole from so close to the dawn of time. In a new study published Wednesday in Nature, researchers describe a cosmic light that defies convention. It was even detectable with a relatively small telescope, though researchers in China did have to ask for help from astronomers in Chile and the United States  to get a higher-resolution look.

Which, according to Nature, means this:

)2, 6, 7, 9, 10, 11, 12, 13. The existence of such black holes when the Universe was less than one billion years old presents substantial challenges to theories of the formation and growth of black holes and the coevolution of black holes and galaxies14. Here we report the discovery of an ultraluminous quasar, SDSS J010013.02+280225.8, at redshift z = 6.30. It has an optical and near-infrared luminosity a few times greater than those of previously known z > 6 quasars. On the basis of the deep absorption trough15 on the blue side of the Lyman-α emission line in the spectrum, we estimate the proper size of the ionized proximity zone associated with the quasar to be about 26 million light years, larger than found with other z > 6.1 quasars with lower luminosities16. We estimate (on the basis of a near-infrared spectrum) that the black hole has a mass of ~1.2 × 1010

But I’m stupid, and all I can think of is this:

Because, after all, she is a professional singer, right? 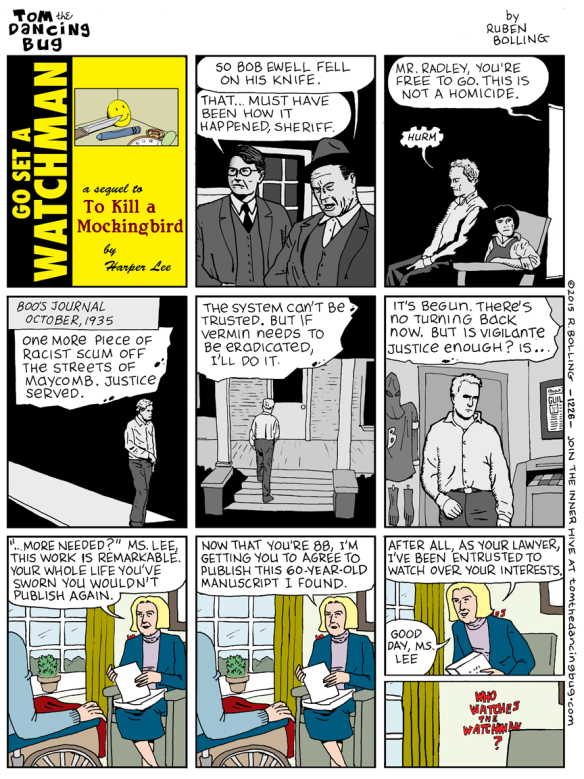 Would you like to understand how the “new” Harper Lee novel, “Go Set a Watchman,” came to be billed as a long-lost, blockbuster sequel to “To Kill a Mockingbird” — one of the definitive books of the American 20th century — when, by all the known facts, it’s an uneven first draft of the famous novel that was never considered for publication?

Would you like to get a glimpse into how clever marketing and cryptic pronouncements have managed to produce an instant bestseller, months before anyone has read it?

“I am shocked and dismayed” always works for me.

In honor of the Oscars, here are some bits of famous movies recreated from stock footage. Oh, and the one that says 1940 and refers to a girl and a tornado, should be 1939:

For those of you who enjoy looking at the past, here’s an infographic that shows the films with the most nominations and the most wins (click throughout to enlarge):

For you fashion mavens, here’s an updated chart of all the gowns worn by the best actress winners (check out Joanne Woodward and Julie Christie for the best acting seamstress award):

And finally, if you’re in an Oscar pool and have to wager on the winner in all of the categories except best actress and best supporting actress, put your money on the middle-age white guy:

And the winner is …

So, here’s a clip that gives the S&M wannabe the gravitas it deserves (yeah, it’s NSFW)

If you dare pick up this book, you have to read it with that voice in your head as the narrator.

And, why is it that when the movie came out, the advance ticket sales went through the roof in the South?

I guess these are Red States because everyone there is going through 50 shades of embarrassment.