From the Chattanooga Times Free Press:

The Tennessee Republican congressman who supported his ex-wife’s decision to get two abortions was among those who voted in favor of a ban on most late-term abortions.

Republican U.S. Rep. Scott DesJarlais, a Jasper physician, was one of 242 House members who voted Wednesday to pass the bill, which forbids most abortions starting with the 20th week of pregnancy.

“Congressman DesJarlais was proud to vote in favor of this legislation,” said his spokesman Robert Jameson, who added that DesJarlais has maintained a “100 percent pro-life voting record” during his five years in Congress and “has always advocated for pro-life values.”

DesJarlais’ support of his ex-wife’s abortions, which occurred before their 1995 marriage, was revealed after his 2012 re-election to Congress in a divorce trial transcript. The transcript also showed the physician had engaged in multiple affairs with patients, and pressured one of them to get an abortion after she told him she was pregnant. The outcome of that pregnancy is unknown.

People complain about government malfunction in Washington, but they keep electing hypocrites like this. The problem isn’t in Washington, it’s with the voters sending these kinds of people to Washington.

On both cases, these idiots think they can beat the U.S. military. They deserve each other.

A couple of different maps here. The first shows the states where people take the most prescription drugs: 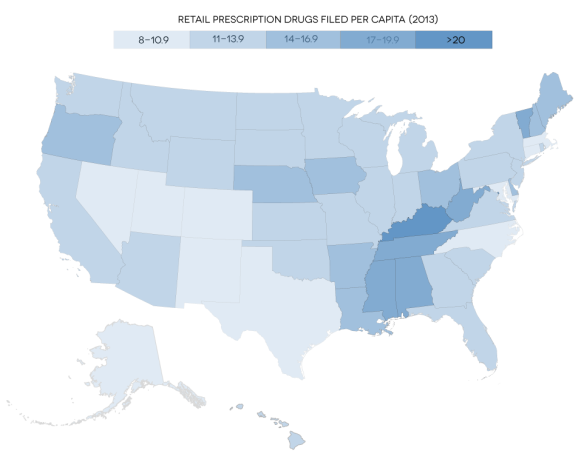 And the second shows the most distinctive cause of death in each state. People don’t look too healthy in Kentucky, where there’s an overabundance of people on pills and the main cause of death seems to show people can’t breathe. But in the last U.S. Senate election the winner vowed to get rid of Obamacare and to do more to promote the use of coal. This is a prime example of people voting against their own interests. But I’m really shocked by Louisiana. How can people possibly die of syphilis in the 21st century? That’s treatable. Meanwhile, Arizona, Arkansas, Tennessee and Alabama really should reconsider their love of guns. Because guns don’t kill people. People with guns kill people.

The map doesn’t show the most common cause of death — that is generally heart disease or cancer. Instead, it shows the cause of death in each state that stands out the most relative to its national average

Three-time Indianapolis 500 champ Helio Castroneves lost control of his car during practice for this year’s Indy. As you see in the above clip, the car spun around, went up in the air, landed upside down, then flipped over to what was left of its wheels.

There was a time when a crash like this would have been fatal. Castroneves walked away.

Just for context (from a 2011 piece on the 100th anniversary of the race in Car and Driver):

Few—if any—venues have made a higher sacrifice to the deities of speed. In the 100 years of the Indy 500, 60 event-related fatalities have occurred at IMS, including 38 drivers, 12 riding mechanics, five spectators, two pit-crew members, two firemen, and one young boy who wasn’t even within the Speedway grounds.
Wilbur Brink, age 12, was in his front yard on Georgetown Street during the 1932 race, when Billy Arnold’s Miller crashed on lap 162. A detached wheel bounced out of the track and across Georgetown, where it struck young Brink, killing him instantly.
The breakdown of driver fatalities in the 500 includes 14 in the race, five in qualifying, 17 in practice, one in testing, and one during his driver’s test.
The foregoing omits the five deaths during various 1909 races that led IMS owners to pave the track with bricks, as well as a single test-session death in 1910. It also omits 31-year-old Stephen White, whose alcohol intake reduced his judgment to “Darwin Award” levels three nights after the 1991 race. White snuck his truck onto the track late at night and was laying down a hot lap when he managed to hit a van. He died in the crash.

If I ever get into an accident, I want to be in a car like the Indy drivers are using today.

So a bunch of tourist were at Yellowstone National Park when a family of bears attacked. At least that’s the frenzied media reaction I saw this week. But here’s what really happened (from National Geographic):

It started with what’s called a “bear jam,” the park’s term for when visitors stop their cars to gawk at a bear—in this case, a family of bears grazing on a hillside near a bridge.

Suddenly the bears, including a mom and her yearling cubs, took a wrong turn and ended up on the bridge along with the curious human onlookers. Their instinct was to get away from the people as quickly as possible, but the people got frightened and blocked her, says Kerry Gunther, head of bear management at Yellowstone.

“It’s obvious she gets a little nervous as she’s trying to get across the bridge,” says Gunther, who was not present but watched the video and spoke to a park colleague who observed the incident.

“The bear was not after people—it could have easily caught anyone it wanted,” he says, adding that the video shows the bears trying to get around the people, but being thwarted because the humans kept moving.

“Pretty much all the events [in the video] were influenced by human behavior.”

So the bears are minding their own business when a bunch of dopes hop out of their cars to take photos. The bears get scared and try to run away, but the people, instead of clearing a path, block the bears. And you see in the video, there are still a bunch of dopes taking photos.

When I saw the video this week, my first though was: “Those bears are moving kind of slow, aren’t they?” Because bears can outrun humans … and definitely these humans.

Tourists and wildlife don’t mix. It causes too much distress for the wildlife.

I don’t care. I liked the movie.

The musical interlude is terror enough.