Tons of spoilers here, so view at your own risk:

Let’s say that 100 years from now, all cars will be self driving, since that’s the new technology grabbing everyone’s attention right now. What does that mean for traffic lights?

Now that looks cool, but we do have a problem.

The video makes the assumption that people won’t cross streets.

Back to the drawing board.

So what would it look like if we moved some states around? (Via XKCD) 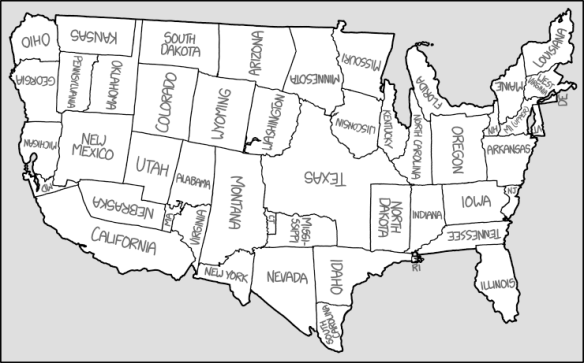 So the less you know, the better off you are? Seems pretty depressing.

The voices in Harley Quinn’s head are hilarious.

Who’d have thought it would be at a different temperature in different parts of the world? (Obviously, the folks at Compound Interest thought about it.)

And if you don’t recognize the films, they are: 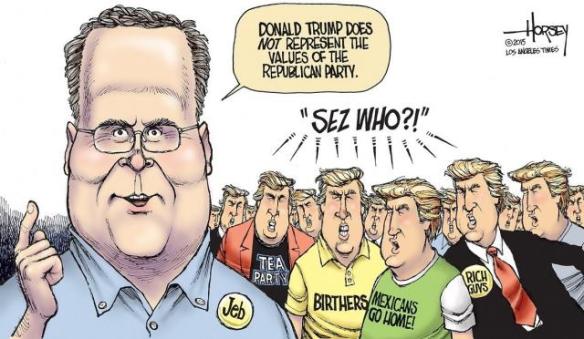 From the Rude Pundit:

Let’s get this straight.

1. Has declared that the President should have no say in choosing a Supreme Court justice in his final year in office;

2. Has elected officials who support a man who led a group that pointed guns at federal employees doing their duty to enforce the laws;

3. Shut down the government because President Obama wouldn’t agree to defund a program that had been passed by a previous Congress;

4. Refused to pass even the mildest of gun regulations in the wake a mass shooting that killed 20 grade school children even though over 90% of Americans supported such action;

5. Supported a government employee who refused to do her job because she didn’t like what she was legally obligated to do;

6. Once passed legislation to force doctors to keep a brain-dead woman alive;

7. Killed an extension of unemployment benefits to the very jobless they now court for votes;

8. Once called anyone who opposed the war in Iraq unpatriotic and now admit that the war was, at best, a mistake (and haven’t apologized for attacking anti-war Americans);

9. Refuse to acknowledge the existence of, let alone the need to do something about, climate change, even though 75% of Americans accept the reality and most think we should try to slow it down or mitigate it;

10. Demonized then destroyed ACORN, an organization that existed to assist the poor;

11. Demonizes and is attempting to destroy Planned Parenthood, an organization that exists to assist the poor.

12. Demonized and voted dozens of times to repeal the Affordable Care Act, a law that exists to assist the poor;

And so very much more, now thinks that Donald Trump is too appalling for them? It’s laughable that a group of psychopaths believes that the psychopath who likes to disembowel his prey and dance with the innards is just a little too crazy to support.

Oh, dear, sweet, dumb Republicans, you own Trump. He is your deformed, conjoined twin who has pulled away from your side, leaving you bleeding to death as you wonder what you can do to ever be whole again.

This is either in Norwegian or Swedish, but we really don’t need a translator.

And by the way here’s what a biathlon is:

One sport that seems to confuse people more than others at the Winter Olympics is biathlon, which is cross country skiing combined with rifle shooting.

While the inclusion of guns in the Olympics may seem like a weird mix, there is actually a perfectly logical explanation.

The sport has its roots in hunting techniques that have been used Scandinavian countries for centuries. Hunters would often take to skis with rifles mounted on their backs to find prey.

These strategies were later used by the Swedish and Norwegian militaries. In fact, the first recorded biathlon competition occurred in the 18th century between the militaries of Sweden and Norway.