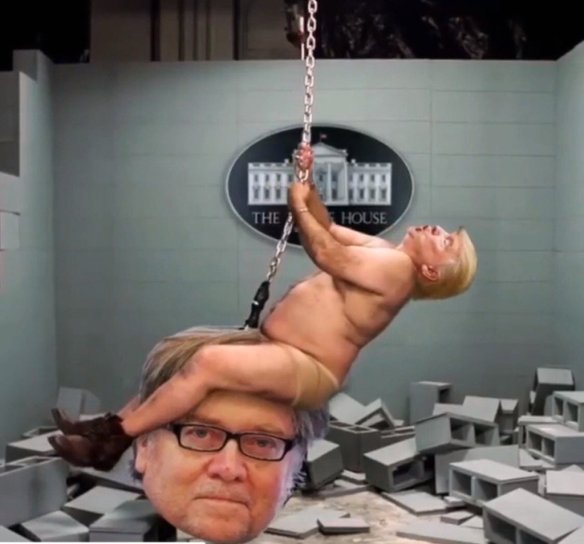 Here’s what the dumbest president in American history (Sorry George W., you’ve lost that title) knows (via the “failing” New York Times and interpreted by The Rude Pundit):

– People, including criminals, in New York real estate, which, he informs us, he did “great” in (“I know all the developers. I know all of the folks. I know the good ones and the bad ones.”)

– Public transportation (“I know the subway system very well. I used to take it to Kew-Forest School, in Forest Hills, when I lived in Queens. And I’d take the subway to school. Seems a long time ago–” Yeah, that was about 60 years ago. Subway’s changed a bit.)

He will also take any opportunity to remind us that he won. Did you know that? Did you fucking know that he won? Yeah, he did: “You know, winning the Electoral College is, for a Republican, is close to impossible and I won it quite easily.” (Trump, along with Eisenhower, Eisenhower, Nixon, Nixon, Reagan, Reagan, Bush, Bush*, and Bush, are Republicans who have won 10 of the last 17 presidential elections. So, you know, put aside history, facts, numbers, and being totally wrong, and Trump is totally right.)

On he went, decrying the infrastructure in places that he “won by massive [amounts]” and proclaiming of the House Freedom Caucus, “I won their districts, some of them, by 48 percent, 42 percent, 45 percent.”

Goddamn, you know what’s worse than being led by a stupid, evil man? Being led by an evil man who is so stupid that he doesn’t realize that he’s stupid or evil. Don’t believe it? Here ya go:

Trump claimed that Representative Elijah Cummings, a Democrat who is a member of the Congressional Black Caucus, said to him, “You will go down as one of the great presidents in the history of our country.” Anyone who read that knew instantly that it was a damned lie. But, even worse, it was a demonstration of just how pathetically myopic Trump’s ego forces him to view the world.

Because Cummings actually said that “he could be a great president if…IF…he takes steps to truly represent all Americans rather than continuing on the divisive and harmful path he is currently on.”

But the nude Ivanka angels in Trump’s head just sang sweetly to him that he was a great man before rubbing their tits his face.