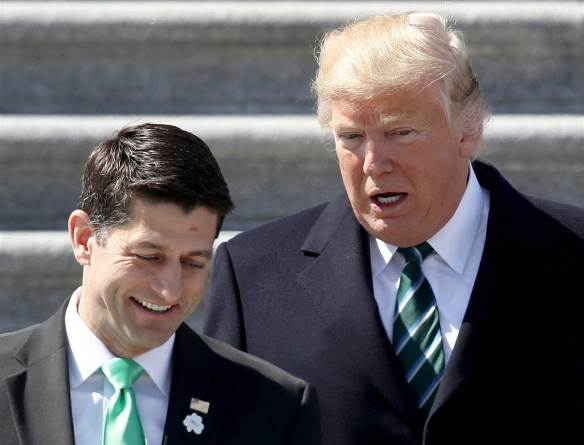 Former FBI Director Jim Comey testified before a Senate committee yesterday and said Putin’s Little Pony tried to strongarm him into dropping the investigation into Michael “Lock Her Up” Flynn’s selling of his soul to the Russians. And on top of that, Comey essentially said you can tell everything Hookerpiss says is a lie, because his mouth is moving.

So House Speaker Paul Ryan, the gunsel to America’s Sydney Greenstreet, offered a defense of his sugar daddy:

In his weekly press conference Thursday morning, Ryan tried to distract from the blockbuster hearing by giving a presentation on House Republicans’ legislative accomplishments this year. When asked about Comey’s testimony in which he claimed that Trump asked him for loyalty and to drop the investigation into former National Security Adviser Michael Flynn, Ryan claimed that Trump didn’t know better.

“The president is new at this,” Ryan said. “He’s new to government. And so he probably wasn’t steeped into the long going protocols that established the relationships between DOJ, FBI, and White Houses.”

When a reporter questioned why that’s an “acceptable excuse,” given that Trump has a staff and counsel that should have been informed, Ryan reiterated that Trump did not know what he was doing.

“He’s new at government,” Ryan said. “Therefore I think he is learning as he goes.”

So the Russian Usurper creates a mess and the gunsel has to clean up after him.

You know, from a certain angle Paul Ryan does look like a Wilmer.