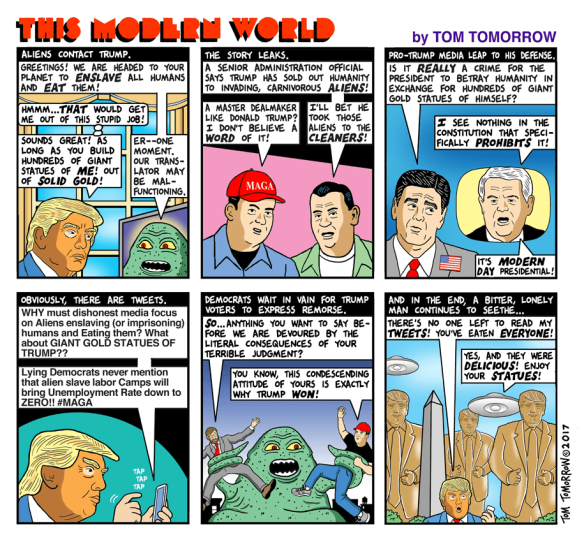 Next, “Key and Peele”

And then there’s Uncle Ruckus:

We’re in the midst of a heatwave in the Ville and in D.C. so thoughts immediately turn to ice cream. Since we want to be educational, let’s take a chemical tour of frozen treats (via Chemical & Engineering News): 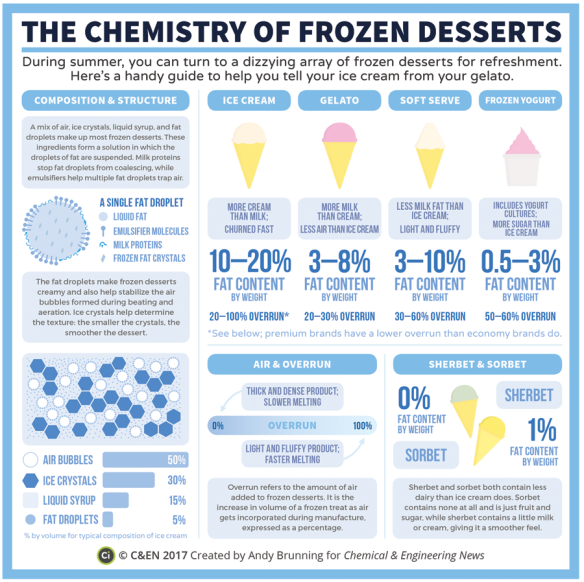 Are my points safe?

It is about the money because it always has been about the money, and, because it always has been about the money, we suspect that the hounds now are baying loudly at the doors of the Kompromat Laundromat. This is how it could have happened: The Trump Organization, reportedly deeply in debt, needed money and couldn’t get a loan from a U.S.-based bank. Meanwhile, the vicious Russian kleptocratic elite had a lot of dough it needed cleaned and was washing it through Deutsche Bank and through banks in Cyprus, an underrated spot for such enterprises. It was a profitable relationship for both parties: Both of the older Trump boys boasted in the past about how important Russian investment had been in maintaining the Trump Organization. Then Dad ran for president. Then he won. And then, by all indications, the bills came due.

One of the more conspicuous debtors to the Russians was a guy named Paul Manafort, who reportedly owed them $17 million in the days before he became manager of Donald Trump’s presidential campaign.

We can safely assume that special counsel Robert Mueller is looking into all of this, and more, but the outline of the essential corruption never has been clearer. The Trumps needed money and the Russians needed to clean a lot of it. Cui bono? Res Ipse loquitur. All of the rest of it, the dodging and weaving and, most recently, the unveiled threats to fire Mueller and unilaterally end the investigations, the almost blithe assault on all democratic norms and institutions, spin out from the possibility that Donald Trump needed money to continue to be Donald Trump to the world, and to himself, and that the easiest place to get that money was from the Russians.

Pussy Grabber is going fire Mueller. And he’s going to pardon all the grifters who have kept him rich. And he’s going to continue this kleptocracy for as long as he’s in office. And Republicans in the House and Senate are going to let him do it. And pump truppets are going to wallow in their contempt for this country and cheer on his every move while he eagerly destroys their lives.

Here’s a thought. Today is Robin Williams’s birthday. In two months, he would have been old enough to collect full Social Security benefits. But he’s been dead for almost three years. It’s unbelievable.

Here’s one of his greatest performances:

Well, I’m excited. Better get caught up on the latest season.

It’s not what you think:

R. Kelly’s lawyer has responded to allegations in a BuzzFeed News story that the R&B singer was holding six women in an abusive “cult.”

“Mr. Robert Kelly is both alarmed and disturbed at the recent revelations attributed to him,” his lawyer, Linda Mensch, said in a statement to People magazine. “Mr. Kelly unequivocally denies such allegations and will work diligently and forcibly to pursue his accusers and clear his name.”

The widely circulated BuzzFeed story, posted Monday, details several parents’ attempts to contact and free their daughters from R. Kelly’s properties in Chicago and Duluth, Ga. Former members of Kelly’s inner circle — Cheryl Mack, Kitti Jones and Asante McGee — allege that he controls what the women can and cannot do. They told BuzzFeed that the women, ranging from two teenagers to a 31-year-old “den mother,” are required to refer to Kelly as “Daddy” and must ask for permission to leave the properties. Kelly, 50, reportedly confiscated their cellphones and, in addition to dictating their daily activities, films their sexual encounters.

Every time I hear about R Kelly, I immediately remember this: 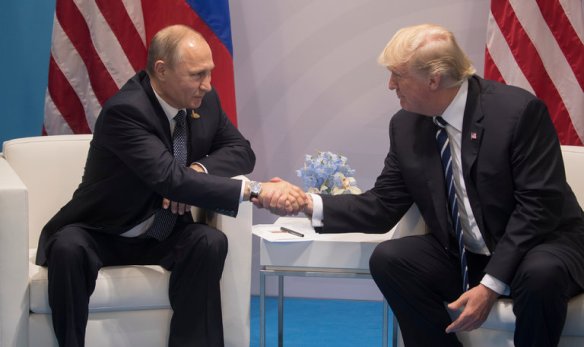 Putin and his little pony

President Trump held a second, informal talk with Russian President Vladimir Putin on the sidelines of the Group of 20 (G-20) summit in Hamburg, Germany, earlier this month, the White House confirmed Tuesday.

According to Tuesday reports, in their second conversation, Trump spoke with the Russian leader for roughly an hour, joined only by Putin’s translator. The meeting had previously gone without mention by the administration.

The White House confirmed that Trump and Putin spoke at a dinner for G20 leaders and their spouses. But a White House official appeared to dispute that the discussion lasted an hour, saying the two only spoke “briefly” near the end of the dinner.

“There was no ‘second meeting’ between President Trump and President Putin, just a brief conversation at the end of a dinner,” the official said. “The insinuation that the White House has tried to ‘hide’ a second meeting is false, malicious and absurd.”

This is wrong on so many levels. Pussy grabber probably sold us out and agreed to something we’re going to regret later. How the fuck do you talk to Putin without your own translator sitting with you?

I really believe the interchange between Putin and his translator went like this:

Babyman: You know I beat Hillary bigly. It was the greatest electoral upset of all time. No one said I could do it. And I won the popular vote.

Putin’s translator to Putin (in Russian): Dickhead is jerking himself off again on how he won the election.

Putin to his translator (in Russian): Dipshit still hasn’t figured out that we rigged the whole thing. What a dope. What an ultramaroon.

Putin’s translator to Babyman: We congratulate you on your honorable victory.

Babyman: And don’t let anyone tell you I didn’t win the popular vote. All those illegal immigrants in California shouldn’t have counted. Bad people. Rapists. Murderers. I’m building a wall. It’s a great wall. The Great Wall of America. Chinese have nothing on us.

Putin’s translator to Putin (in Russian): You know he’s talking about the popular vote and immigrants, right? You heard him say California and wall and Chinese? How does he get his head that far up his ass?

Putin to his translator (in Russian): You remember those Jerry Lewis movies where the moron yells “Hey, lady!”? He reminds me of that guy. Hey, you want to stop by later and watch him and the whores on the pee tape? It’s a riot.

Putin’s translator to Babyman: Your accomplishments are monumental. You should be very proud of yourself.