If I read another story about how decent people should let Spanky and his gang of fascists go on with their lives without being called out for being fascists, I’m going to scream:

Many who disagree with the policies and tone of Trump and his administration believe silence is complicity. …

But others, even those who vehemently oppose the administration’s politics, do not agree with such aggressive pushback.

David Axelrod, a key architect of Barack Obama’s presidential campaigns, tweeted that he disagreed with those cheering the restaurant’s eviction of Sanders. “I am kind of amazed and appalled by the number of folks on Left who applauded the expulsion,” he tweeted. “This, in the end, is a triumph for @realDonaldTrump vision of America: Now we’re divided by red plates & blue plates! #sad.”

And look where restraint got us. We’re now ruled by a kleptocrat and his family of grifters.

The flaccid weasels who say be nice to the Nazis think they’ll continue to be invited to cocktail parties with the demented Cheeto’s stooges if they continue to play nice. But the rest of us know that if these brown-shirted cretin aren’t stopped, Axelrod is going to be carted off to Laura Ingraham “Summer camps” with the rest of us.

Because this isn’t something we can just sit quietly through and be civil about. 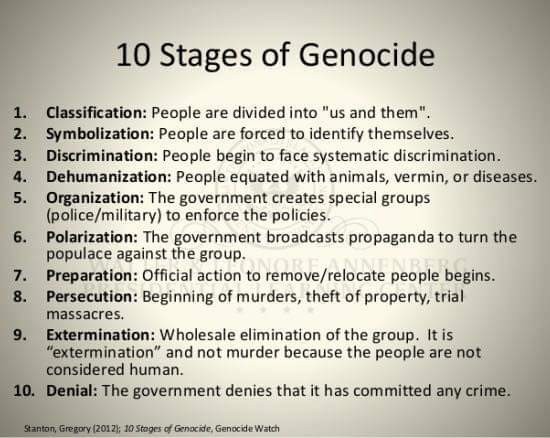 Wake up enablers. We are at stage 7. Actually 7.5, because the feckless runts serving the pumpkin tinged pussygrabber are already laying the groundwork for number 10.

So, no. Don’t let the koncentration kamp klowns eat in peace. They are committing and enabling crimes against humanity.