Back in the days we had a real president, Republicans had a stroke when Obama’s daughters dressed casually for a photo op:

Elizabeth Lauten, the Republican congressional aide who faced a backlash after sharply criticizing the first daughters, has resigned.

Over the weekend, a Facebook post written by Lauten surfaced after the White House’s annual turkey pardoning ceremony in which the aide criticizes the daughters.

The post read, “Dear Sasha and Malia, I get you’re both in those awful teen years, but you’re a part of the First Family, try showing a little class. At least respect the part you play. Then again your mother and father don’t respect their positions very much, or the nation for that matter, so I’m guessing you’re coming up a little short in the ‘good role model’ department.”

“Nevertheless, stretch yourself. Rise to the occasion. Act like being in the White House matters to you. Dress like you deserve respect, not a spot at a bar. And certainly don’t make faces during televised public events.”

But nowadays, the GOP has nothing to say when Spanky brings in a bunch of bikers bearing boobs:

The dress code for President Trump’s by-invitation meet-and-greet with motorcycle enthusiasts here on Saturday was biker chic — leather, bandannas and for at least one of the supporters who posed with Trump at the raucous event, sexist and other offensive patches.

A bearded man who is part of a New Jersey “Bikers for Trump” group stood with the president as he shook hands inside his posh golf club near here, and again when the group posed for photos outside, engines revving.

“I (heart) Guns & Titties,” reads one patch on the unidentified man’s vest. The patch features a drawing of a woman’s naked torso and breasts and a pair of handguns atop her nipples. 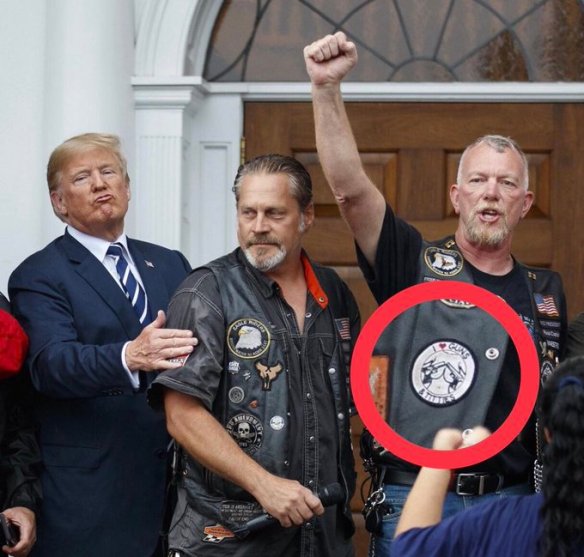 The kandy kolored klown and his party are a bunch of unrepentant low lifes, and when the midterm elections come they can’t be kicked out of office fast enough. Democrats need to take over Congress and run investigations through every committee to fully expose the komplicity, korruption and kollusion that is in the marrow of every member of the GOP.