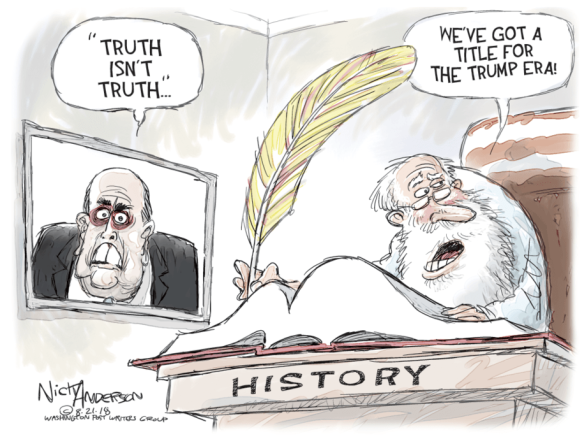 We have reached new levels of absurdity with Spanky and his gang:

President Donald Trump’s lawyer Rudy Giuliani on Sunday claimed “truth isn’t truth” when trying to explain why the president should not testify for special counsel Robert Mueller for fear of being trapped into a lie that could lead to a perjury charge.

“When you tell me that, you know, he should testify because he’s going to tell the truth and he shouldn’t worry, well that’s so silly because it’s somebody’s version of the truth. Not the truth,” Giuliani told Chuck Todd on NBC’s “Meet the Press” on Sunday morning.

“No, no, it isn’t truth,” Giuliani said. “Truth isn’t truth. The President of the United States says, “I didn’t …”

Todd said: “This is going to become a bad meme.“

Giuliani‘s remark was not the first time he has gone down this road.

First of all, Chuck. Memes aren’t important, and saying something as stupid as that only makes this worse. A meme is:

This isn’t a meme. This isn’t humorous. The lawyer for the president of the United States just told you he and the administration are going to lie … no strike that … they’re going to lie to your face, and you can’t do anything about it.