Just scanning videos this morning, and saw this and thought, “God, those guys are old.”

Because I remember the time I saw them in concert, and they looked like this:

Then I realized, I was older then than they were. Which means I’m older now than they are.

But at least I have my hair.

Think about this for a while:

File this under: Guns don’t shoot people. Old people with guns shoot themselves and other people:

A man accidentally shot himself and his wife at an East Tennessee church on Thursday while he was showing off his gun during a discussion on recent church shootings, police said.

Elder members of First United Methodist Church in Tellico Plains were cleaning up about 1 p.m. after enjoying a luncheon held to celebrate Thanksgiving. They began talking about guns in churches, according to Tellico Plains Police Chief Russ Parks.

A man in his 80s pulled out a .380 caliber Ruger handgun and said, “I carry my handgun everywhere,” according to Parks.

“Somebody else walked up and said, ‘Can I see it?’ ” Parks said. “He pulled it back out and said, ‘With this loaded indicator, I can tell that it’s not loaded.’ “

He pulled the trigger.

“Evidently he just forgot that he re-chambered the weapon,” Parks said.

The gun was lying on its side on a table. The bullet sliced the palm of the man’s upward-facing hand, then entered the left side of his wife’s abdomen and exited the right side, Parks said.

Both the husband and wife, who is also in her 80s, were flown to the University of Tennessee Medical Center with injuries that police said didn’t appear to be life-threatening. Their names had not been released as of Thursday evening.

He’s in his 80s and carries his gun everywhere. He’s from Tennessee, so it’s a wonder he hasn’t shot that last tooth out of his mouth.

This would be a great invention. (Are you listening, Jeff Bezos?)

I never look at ads that run before YouTube videos, but as I was checking one out on a dog using an automatic tennis ball thrower (to be posted at a future date)  I saw this:

It’s an elaborate ad for Lyft, and as I sat mesmerized by it I wondered:

Why is that old lady driving in the snow! Doesn’t she know she’ll get in an accident and could die?

And then she gets in an accident. But Lyft gives us a happy ending. But I’m still thinking: “If this was real life, she would have died.”

So, Lyft. DON’T ENCOURAGE OLD PEOPLE TO DRIVE IN THE SNOW!!!!

The folks marked in blue were made up a good chunk of the crowds you saw at El Cheeto’s campaign rallies.

What does a middle-aged white couple in Kentucky do when they’re in bad health (Via Vox)?

Can you walk through what your experience has been with Healthcare.gov?

The insurance we had before, we ended up paying about $1,200 a month for a family of five. It just kept going up each year.

So we ended up dropping it.

We didn’t have health insurance. And we went for maybe two years with no insurance until this came out. We really didn’t go to the doctor because it cost too much.

So for the past two years, we had the Healthcare.gov. It’s made it affordable.

My husband ended up getting sick this year. He has non-alcoholic cirrhosis of the liver.

He’s lost all this weight and all this muscle tone. Some people don’t recognize him that he’s known for years until he speaks and they recognize his voice.

But it’s been great to have health insurance, because I couldn’t imagine what it would be like to not have it with all the treatments and things that he’s had to have done.

When we didn’t have health insurance, we didn’t go and get blood work and all that stuff done to be checked to see, you know, how his liver was doing.

He was taking medicines that could damage the liver for the cholesterol and all that stuff. But because it costs so much to get blood work done … [the doctor] wanted it done every three months, and he would do it maybe once a year.

So just to be clear, he only got it once a year during the years that you didn’t have—

So like I said, we didn’t go get it done, and so now he is very sick.

So what do you think about Obamacare as a law? I know it’s not especially popular.

I have liked the fact that it gave us health insurance, you know, and I know some have not. Some have not been wanting to be forced to have it. But other ones, I know it has helped. I know a lot of people that have gotten it that did not have health insurance before.

Without health care, specifically Obamacare, this woman’s husband would be dead. And ever since Obamacare has existed, Republicans have tried to repeal it, and ofter nothing to replace it. Plus, Donald Trump ran for president specifically saying he would get rid of Obamacare.

So, whom did the Kentucky couple vote for in the 2016 presidential election?

We voted for Trump.

So how did you decide to vote for him, since he’s one of the people promising to repeal Obamacare?

Well … we liked him because he just seemed to be a businessman.

I’m sorry, my head just exploded. Do they not realize they’ve committed suicide?

You know, what are we to do?

So I don’t know. Maybe he’s thinking about, you know, the little people that are not making the big money, like what they make in New York and Washington and all the places that, you know, this is not, you know, something — this is people’s lives that’s being affected.

Yeah. Going into it, did you hear him talking about his health care promises, or was it not something that came up in his ads or debates for you?

Um, no, I guess we really didn’t think about that, that he was going to cancel that or change that or take it away. I guess I always just thought that it would be there. I was thinking that once it was made into a law that it could not be changed, but I guess it can? Yes?

It can be changed.

Did you feel like you heard them talking about Obamacare repeal in the campaign?

Well, we did hear him talking about it some, that he was going to, but like I said, I always just thought that he was, if he changed it, it would be that it would be some other form of health insurance that he would have.

No, I totally understand. During the debates, Trump was the one saying, “I’m going to cover everybody.”

I don’t know. I guess the next four years is going to be different. I don’t know what to look for.

You’re scaring me now, on the insurance part.

’Cause I have been in a panic, so I’m afraid now that the insurance is going to go away and we’re going to be up a creek.

First of all, lady, don’t lie to us. You didn’t vote for Trump because he seemed to be a businessman. You voted for him because he was a lying, racist, anti-Semitic, xenophobic, homophobic, misogynistic, pedophilic thief, and you embraced everything he stood for. You just knew he was going to make America great again by making defenseless people suffer. Only you thought the only defenseless people were brown people.

And now you find you’re defenseless. So suffer.

Here’s the reality of your vote. You’re not going to be up a creek. You’re going to die. And it’s going to be much sooner than you would have if the woman you were yelling “lock her up” at had won.

The herd manages to thin itself out.

A comprehensive chart from Information Is Beautiful that links illness to ethnicity and gender: 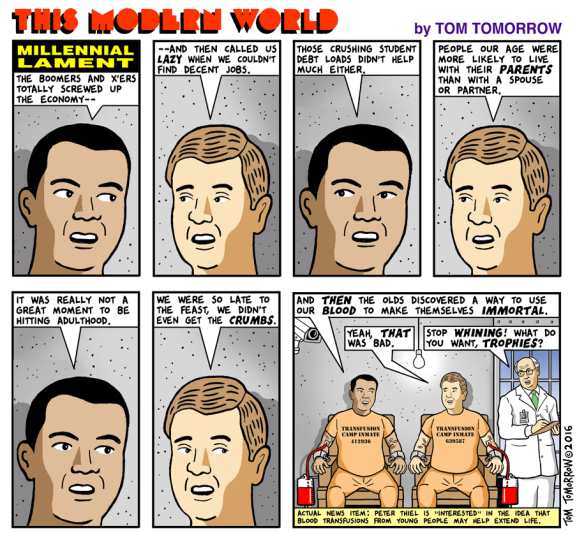 I’m not surprised. Why do you think Dick Cheney and Rupert Murdoch have stayed alive so long?