Spanky and his gang are drugging children they kidnapped from their parents:

A federal judge on Monday found that U.S. government officials have been giving psychotropic medication to migrant children at a Texas facility without first seeking the consent of their parents or guardians, in violation of state child welfare laws.

U.S. District Judge Dolly Gee in Los Angeles ordered the Trump administration to obtain consent or a court order before administering any psychotropic medications to migrant children, except in cases of dire emergencies. She also ordered that the government move all children out of a Texas facility, Shiloh Residential Treatment Center in Manvel, except for children deemed by a licensed professional to pose a “risk of harm” to themselves or others. …

Children testified in court filings that staff with the U.S. Office of Refugee Resettlement would sometimes not tell them what drugs they were being given or why. They recalled feeling side effects such as nausea, dizziness, depression and weight gain. Some reported being forcibly injected with drugs, and others said they felt that refusing medications would cause them to be detained longer.

“I witnessed staff members forcefully give medication four times,” one child held at Shiloh, identified as Isabella M., said. “. . . Two staff members pinned down the girl . . . and a doctor gave her one or two injections.”

It’s just one atrocity after another with these animals.  The war crimes of the administration of George W. Bush (the dumber) are starting to pale in comparison to these crimes against humanity.

We keep talking about the opioid epidemic. But people don’t understand how addicts get hooked.

I really should start watching “Archer.” I started a season, thought it was really bizarre and funny, and wanted to go back for more, but forgot:

Want to know why a lot of Russians are missing from this year’s Olympic Games. Here’s a chart from Compound Interest (click on the chart to see it on steroids): 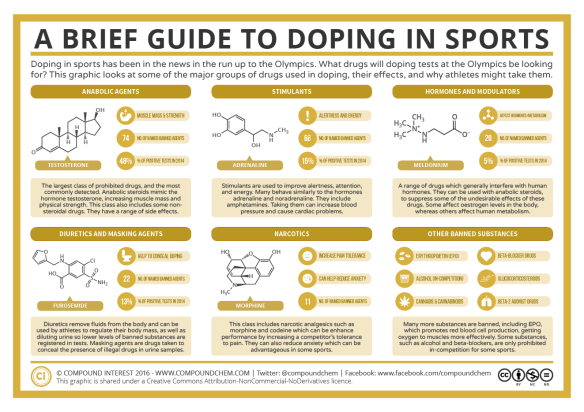 And here, specifically, is what the Russians used (via C&EN):

Whenever I see a drug ad on TV that eventually leads to the line “Ask your doctor about …,” my first thought is, “How is this going to kill me?”

And the thing about the ads is that they always say how the drug they’re hawking is going to kill you. And they’re not subtle about it. They tell you if things go wrong, you’re going to die. And it usually is an unpleasant death.

Don’t believe me? Just wait for the next ad to show up on TV, and when it begins say to the screen, “How is this going to kill me?”

I doubt the weed was real, but if it was they would definitely have been put under the jail in the cop encounter. And talk about a bad influence to America’s youth. That poor girl put up with a lot. 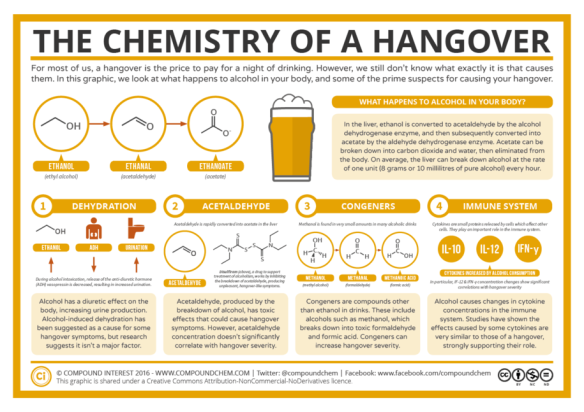 The holidays are over. The drinking is done and the hangovers are wearing off. Why did your head hurt after all that champagne. It’s the chemicals. (Click to enlarge)

I’m still trying to figure out how poor people in bad health in Kentucky decided they wanted a Republican governor who promised to take away their health insurance.

The Rude Pundit explained it to me:

So people who have less than nothing would rather have their cancer go untreated than take Medicaid from a Negro or allow two people of the same sex to get married. That is about as delusional and pathetic as it gets and, frankly, so gut-level, depressingly dumb that, on his crueler days, the Rude Pundit thinks it’d be just fine for them all to get sick and die and raise the intelligence of the species just a bit. Hell, they pretty much just admitted that they’re cool with that.

But here’s the thing: The country will not move forward without an appeal to the gut-level stupid. Forget the fucked-in-the-brain-by-religion crowd. They’re out of reach. But there is a contingent of the rural poor that can be reached and can be brought into the fold. It’s just been too long without any real effort to do so, not during the Reagan or Bush or Clinton or Bush II years and not as much as needed during the Obama administration.

Sure, it’d be easy to say, “Well, let ’em freeze to death in a ditch with their single tooth.” Except for shit like this very election, shit that keeps happening, that happened in 2014, too, shit that has an effect on the House of Representatives, for instance. That has to do with the lives of you and, more importantly, the Rude Pundit.

The stupid people aren’t going away. We just haven’t figured out how to make them less stupid.

Here’s a map of the election results. Typical blue and red designations:

And here’s a map of where Medicaid is used the most in the state. The more brown, the more Medicaid:

So most of the places that rely on Medicaid thought it was a good idea to vote for the guy who said he would get rid of the healthcare they rely on. That means they are more likely to die. That’s what getting rid of the state exchange means.

And they knew that’s what he was going to do. I voted in the Kentucky election and I saw the ads. It wasn’t something Matt Blevin, the Republican governor-elect, was trying to sneak through.

So what’s drove them to vote for that? The Washington Post took a look at that today:

Dennis Blackburn has this splintered self-interest. The 56-year-old mechanic hasn’t worked in 18 months, since he lost his job at a tire company that supplies a diminishing number of local coal mines. “The old guy had to go home,” Blackburn says of his layoff.

He has a hereditary liver disorder, numbness in his hands and legs, back pain from folding his 6-foot-1-inch frame into 29-inch mine shafts as a young man, plus an abnormal heart rhythm — the likely vestige of having been struck by lightning 15 years ago in his tin-roofed farmhouse.

Blackburn was making small payments on an MRI he’d gotten at Pikeville Medical Center, the only hospital in a 150-mile radius, when he heard about Big Sandy’s Shelby Valley Clinic. There he met Fleming, who helped him sign up for one of the managed-care Medicaid plans available in Kentucky.

On Election Day, Blackburn voted for Bevin because he is tired of career politicians and thought a businessman would be more apt to create the jobs that Pike County so needs. Yet when it comes to the state’s expansion of health insurance, “it doesn’t look to me as if he understands,” Blackburn said. “Without this little bit of help these people are giving me, I could probably die. . . . It’s not right to not understand something but want to stamp it out.”

I don’t know what to say. The guy just signed his own death warrant. He doesn’t realize that Blevin fully understands what he’s doing. This isn’t a case of a politician being misguided, because he absolutely believes the poor are moochers and are better off dead.

Maybe it’s for the best. Sometimes, you’ve got to thin out the herd.