This has been rattling in my brain for a while.

The krazed krimson krackpot decided to get rid of the North American Free Trade Agreement (NAFTA) just to be a dick and come up with a new trade agreement between the United States, Canada and Mexico.

Of course, it was obvious it was going to be a disaster:

The best summary of the USMCA, aka the Village People deal, aka NAFTA with a few new mistakes https://t.co/wUT10Ui1zn

But that’s not what I’ve been obsessing over.

Babyman insists the new deal be referred to a USMCA (sort of a bastardized abbreviation of the three countries). But deals like this should get an acronym we can pronounce.

Then it hit me:

The perfect acronym for anything coming from this band of oligarchical vermin.

See. I only needed five degrees.

So am I exaggerating?

Butina has been charged with two counts: conspiracy, and acting as an agent of a foreign government without informing the attorney general. On Wednesday, she pleaded not guilty to both.

Now, this is not part of the Mueller investigation. The FBI’s Washington Field Office investigated Butina, and she’s being prosecuted by the DC US Attorney’s Office. For whatever reason, this probe was not put under Mueller’s purview.

But the exact nature, and breadth, of what is being investigated related to Butina remains vague — making it unclear exactly how much legal jeopardy the NRA or the Trump camp is now in.

If the NRA really was bamboozled by a Russian spy, the group could be a victim in all this. Yet there are a series of McClatchy reports, dating back to January, asserting the FBI is investigating the NRA’s finances — and specifically whether Torshin “illegally funneled money” to the group “to help Donald Trump win the presidency.”

The NRA is not legally obligated to publicly reveal its donors, and does not do so. It spent tens of millions of dollars on the 2016 elections to try to get Trump elected. An aide to Sen. Ron Wyden (D-OR), who’s been investigating the matter, told McClatchy that the NRA had dodged his questions about whether it accepted money from shell companies that could have been routed from Russians. (Butina and Erickson set up a shell company, Bridge LLC, together.)

As for Trump’s associates — the government filings about Butina are conspicuously light on references to her outreach to Trump’s team, even though this outreach has been widely reported in the media.

However, in May, a Spanish organized crime prosecutor said that his government had given wiretaps of some of Alexander Torshin’s conversations to the FBI “just a few months ago.” He added, “Mr. Trump’s son should be concerned.”

For now, though, only Butina has been charged. A DC judge ordered Wednesday that she be jailed without bond until her trial.

Let’s carry this a little further.

See! Only needed three degrees there.

Let’s remember why such a bill was necessary:

So, Republicans are doing all they can to make sure this happens again. They know we’ll bail out the banks again.

Note to Self: This is your reminder:

That life in the alt-right universe for one man.

He’s right, but he’s one of the rich who’s getting richer. Let’s see how he uses the windfall, because we know what the pussygrabber’s going to do.

See you cut taxes for the rich, and people who aren’t rich starve.

They lie. They always lie. And they always will lie. 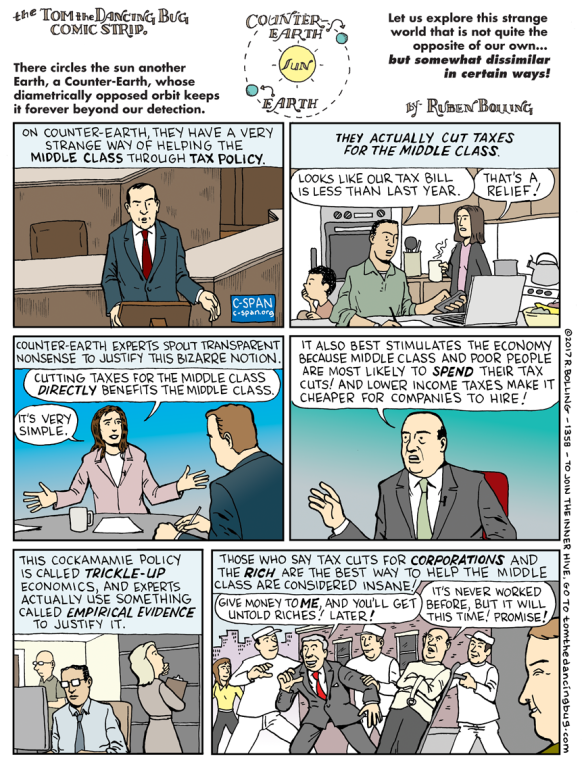 How can they possibly survive?