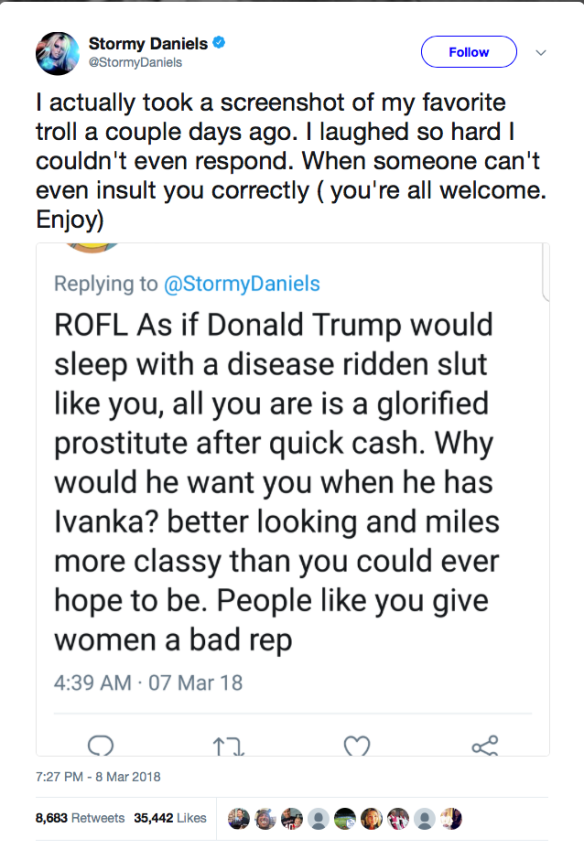 OK, doofus. This is Ivanka:

Maybe we can. But can Alabama:?

Alabama Republicans may be ready to give Roy Moore a pass for the numerous accusations against him — that is, if they believe the allegations to begin with.

The polling group Change Research found that Moore has reopened an earlier 5-point lead over Democratic candidate Doug Jones. Overall, 49 percent of Alabama voters asked said they plan on voting for Moore while only 44 percent said they would vote for Jones; by contrast, Jones had a 3-point lead over Moore in mid-November, when the accusations against Moore began to make the news.

Let’s not “both sides” this. Democrats condemned Anthony Weiner when he was caught sexting a minor, and he’s in jail today. Roy Moore molested a 14-year-old girl when he was in his 30s, and deviates in Alabama are more than willing to put him in the U.S. Senate.

And the Jesus, Mary and Joseph comparison is way beyond fucked up.

And why is this not funny? The Guardian explains:

[W]e can’t just point the finger at, and pray for the downfall of, Donald Trump. He is merely the face of a deeper Republican malaise. The hypocrisies he embodies extend far beyond him. For decades, Republicans cast themselves as the party of family values, wagging their finger at anyone who had fallen short of the moral standards they set. But when Trump came along, promising them the tax cuts and seats on the supreme court they craved, all that went out of the window. Suddenly they were prepared to embrace a thrice-married worshipper of mammon who brags about sexually assaulting women and was happy to assess his own daughter as “a piece of ass”. Note the polling on white evangelical Christians. In 2011 they were the group least likely to accept that a candidate guilty of immoral behaviour in their personal life might nevertheless be able to act ethically as a leader. Now they are the by 2017 to become the most forgiving on that score.
Consider the way Republicans used to claim “freedom” as their own, posing as liberty’s champions. Now it emerges that fewer than half of all Republican voters believe news organisations should be free to criticise political leaders – a freedom that is surely fundamental.
And of course, for decades Republicans wrapped themselves in the flag, claiming a monopoly on patriotism, casting themselves as the heirs to Ronald Reagan and all those who stood strong against Russian authoritarianism. Yet now, delegates to the CPAC ultra-conservative conference will happily wave little Russian flags, so long as they have Trump’s name on them.
It’s natural to direct our fury at Trump and to want to see him gone. But it was the wider American right that, over more than two decades, feasted on bigotry, ignorance and contempt for science, facts and the compromises required by democratic governance – it was that right that incubated Trump and Trumpism. If impeachment and removal from office are ever to be more than a fantasy, it will be Republicans who will have to make it happen. And that will require them to do more than change a president. They will have to change themselves.

Every day, I feel more contempt for Lügenorange and his moron supporters. Their mendacity and stupidty are going to get someone killed:

A North Carolina man was arrested Sunday after he walked into a popular pizza restaurant in Northwest Washington carrying an assault rifle and fired one or more shots, D.C. police said. The man told police he had come to the restaurant to “self-investigate” an election-related conspiracy theory involving Hillary Clinton that spread online during her presidential campaign.

The incident caused panic, with several businesses going into lockdown as police swarmed the neighborhood after receiving the call shortly before 3 p.m.

Police said 28-year-old Edgar Maddison Welch, of Salisbury, N.C., walked in the front door of Comet Ping Pong and pointed a firearm in the direction of a restaurant employee. The employee was able to flee and notify police. Police said Welch proceeded to discharge the rifle inside the restaurant.

Welch has been charged with assault with a dangerous weapon. …

The restaurant’s owner and employees were threatened on social media in the days before the election after fake news stories circulated claiming that then-Democratic presidential nominee Hillary Clinton and her campaign chief were running a child sex ring from the restaurant’s backrooms. Even Michael Flynn, a retired general who President-elect Trump has tapped to advise him on national security, shared stories about another anti-Clinton conspiracy theory involving pedophilia. None of them were true. But the fake stories and threats persisted, some even aimed at children of Comet Ping Pong employees and patrons. The restaurant’s owner was forced to contact the FBI, local police, Facebook and other social-media platforms in an effort to remove the articles.

Gun toting morons are showing up in a city I spend a lot of time in, meaning the fool they elected has put my life in danger. An idiot, who can’t figure out that something is an egregious lie, thinks an an assault rifle gives him the right to conduct his own “self-investigation.” These people should rot in hell.

And the verified crimson pedophiles’s national security adviser is publicizing the most hideous of  lies because that’s what makes his boss popular among the Tea Party terrorists who call themselves GOP voters.

But it was only a fantasy.
The wall was to high, as you can see.
No matter how he tried, he could not break free.
And the worms ate into his brain.

I made the connection long ago. Pink Floyd was right.

Any reason why this is an issue for the GOP?

Anyway the Republican presidential candidates can stick their foot in their mouths even more on this issue?

Marco Rubio has defended his record as an opponent of abortion, against criticism arising from his statement during the first Republican presidential debate on Thursday that he had never advocated for exceptions of any kind, even if a woman’s life was in danger or when she had been raped.

Wisconsin governor Scott Walker said he is prepared to sign into law a 20-week abortion ban without any exceptions for victims of rape or incest, arguing that women are concerned with those issues “in the initial months” of pregnancy.

Walker, a Republican who is expected to run for president in 2016, made the comments ahead of a public hearing in the Wisconsin legislature on proposed legislation that would outlaw abortions after 20 weeks of pregnancy. Local television station WKOW aired Walker’s claim that an exception for rape or incest is not necessarily needed in the bill.

Are we done yet?

“Ethel Waters, for example, was the result of a forcible rape,” [Mike] Huckabee said of the late American gospel singer. One-time presidential candidate Huckabee added: “I used to work for James Robison back in the 1970s, he leads a large Christian organization. He, himself, was the result of a forcible rape. And so I know it happens, and yet even from those horrible, horrible tragedies of rape, which are inexcusable and indefensible, life has come and sometimes, you know, those people are able to do extraordinary things.”

With Texas Sen. Ted Cruz in the mix, it’ll be a race to the bottom on women’s rights. But to a degree, Cruz’s campaign is a continuation of what Todd Akin started in 2012. (Akin was the Missouri Senate candidate who infamously remarked that victims of “legitimate rape” have ways to “shut that whole thing down” so they don’t get pregnant.) What was once an outlier on women’s right to choose an abortion – that even victims of rape and incest don’t have the right to terminate a pregnancy resulting from it – has now become a cornerstone of the Republican platform. And Republicans are now conflating abortion and birth control in an attempt to prevent women from accessing both.

Cruz, like Akin, opposes abortion for victims of rape and incest. He also labels forms of contraception such as Plan B “abortifacients”, which isn’t scientifically or medically correct. At the Value Voters Summitlast fall, Cruz repeatedly referred to contraception as “abortion-inducing drugs.”

So why are Republicans worried about Donald Trump alienating women voters? It hasn’t hurt him with the party’s voters. Just look at this poll taken after last week’s debate: