Bruce Bartlett at the Fiscal Times makes the following observation:

There is no question that Barack Obama is one of our most enigmatic presidents. Despite having published two volumes of memoirs before being elected president, we really don’t know that much about what makes him tick. The ongoing debate over the deficit and the debt limit is clarifying what I think he is: a Democratic Richard Nixon. …

… Here are a few examples of Obama’s effective conservatism:

— His stimulus bill was half the size that his advisers thought necessary;
— He continued Bush’s war and national security policies without change and even retained Bush’s defense secretary;
— He put forward a health plan almost identical to those that had been supported by Republicans such as Mitt Romney in the recent past, pointedly rejecting the single-payer option favored by liberals;
— He caved to conservative demands that the Bush tax cuts be extended without getting any quid pro quo whatsoever;
— And in the past few weeks he has supported deficit reductions that go far beyond those offered by Republicans.

His point is that Obama is to liberals what Richard Nixon was to conservatives.

Although Republicans routinely accuse him (Obama) of being a socialist, an honest examination of his presidency must conclude that he has in fact been moderately conservative to exactly the same degree that Nixon was moderately liberal.

And no matter how much you hated Nixon, if you compare their domestic records on entitlement programs, Nixon comes out ahead. Nixon increased spending on social programs. Obama is cutting it back. Nixon expanded government regulation through the creation of such things as the Environmental Protection Agency and other federal agencies that protected consumers, Bartlett notes. Obama is cutting federal regulatory programs and jobs at a time when jobs are scarce.

I’m not saying Nixon was a better person than Obama. His administration is best represented in Philip Roth‘s “Our Gang,” which ends with a dead Nixon (named “Trick E. Dixon”) plotting to take over Hell from Satan.

Only months ago, there was a lot of angst over tax cuts for the rich, with the Republicans saying the Bush era tax cuts had to be extended for people making more than $250,000 a year, giving the general population the impression that if the rich didn’t get their fair share, everything would collapse, economically.

That argument, of course, was farcical. But people fell for it, Obama caved and the tax cuts were extended. A graphical representation of income distribution in the U.S. would have been a big help then.

Anyway, the issue isn’t dead. The GOP is still fighting to make the tax cuts permanent. But Mother Jones magazine has put together a couple of graphs that you should keep handy, just to remind yourself that when the issue comes around again, the rich won’t be hurting if their Bush tax cuts are eliminated.

Take a look at this: 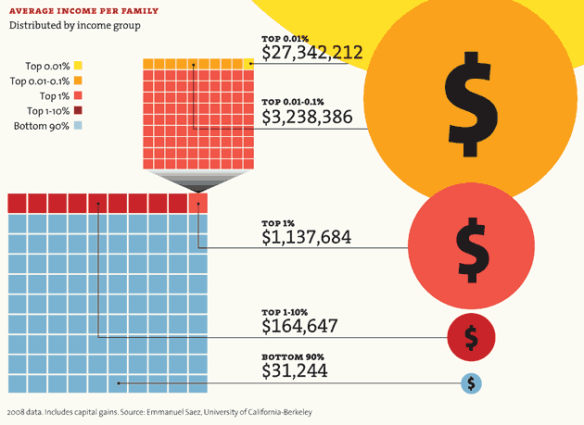 We really need to pay more attention to what is real, and ignore the fantasy projected to us by on-air TV people and bloated radio pundits, many of whom are in those top brackets. They tell us that rescinding the Bush tax cuts for the rich will hurt the economy. What they fail to tell you is that if the rich lose those tax cuts, it affects their economy.