The Louisville Cardinals destroyed the Savannah State Tigers last night at the Yum Center. The score was 41-7 at the half. The final score was 87-26. Louisville coach Rick Pitino did everything he could to not run up the score.

“I don’t like to see any team struggle like that. I really don’t,” he said at the conclusion of his post-game press conference.

“I tried everything. We played four white guys and an Egyptian.”

Deadspin follows up with this observation:

He did! A lineup consisting of three walk-ons, a Norwegian 7-foot freshman, and an Egyptian 7-foot freshman couldn’t reverse the carnage. For a while—and this is not much of exaggeration—you wondered if Savannah State would ever score. The Tigers were shut out for the first 15:58 of the game, falling behind 29-0 before earning an iffy shooting foul and hitting a single, sad free throw.

What a dope (from the Courier-Journal):

Former Louisville basketball player Chane Behanan was cited for marijuana possession early this morning, according to the Louisville Metro Police.

Behanan, who was kicked off the team this season for what he later admitted was repeated drug use, was cited around 1 a.m. near 17th and Broadway, according to police.

It was not clear how much marijuana Behanan had on his person nor would police say whether he was intoxicated.

He’s going to play in Colorado. Pot is legal there. Why go to Louisville, where you’ve been busted before, when you can obey the law in Colorado? I guess I’m one of the Louisville fans who believe if this guy had his head together, we’d still be in the NCAA tournament.

That fight for the ball under the board against Michigan is one of the best examples of toughness in basketball.

I should be cheering another march to the Final Four now. Instead, I’m doing this:

Another look back at the 2013 NCAA basketball final. I still have confetti I collected at the end of the game in the Georgia Dome. Can’t wait for next season, but there are high hopes for the football team this year, already off to a 4-0 start. (Unfortunately, didn’t get any confetti at the Sugar Bowl in New Orleans last January.)

Is there a better way to cap off a great year for the University of Louisville sports program?

The Cardinals basketball team meets the president. They have a ceremony where politicians from both sides of the aisle are actually civil to one another. Obama gives a pretty good recap of the NCAA tournament, and Rick Pitino gives a speech praising the city and school he’s adopted.

And Russ Smith. Where is he anyway? (From NBC Sports):

A preseason All-American and the leading scorer for the reigning national champs, Russ Smith has been named a member of the East Coast All-Stars, a 12-man team that left for Estonia to play in a tournament called the Four Nations Cup. …

He also won’t be in attendance as the Cardinals make a trip to the White House on Tuesday, which is actually a national tragedy: We won’t get a chance to see what happens when Russ Smith meets President Obama.

That would be a sight. Well, there’s always next year.

This just in from Washington, D.C.:

Denny Crum and the University of Louisville basketball

Rick Pitino and this year’s Cardinals will do the same with President Barack Obama at 2:05 p.m. July 23.

confirmed U of L’s visit, a university spokesperson announced Tuesday, and the Cardinals will be honored at the Rose Garden.

“It is truly one of the unique experiences in a young man’s life to go to the White House and meet the President of the United States,” the hall of fame coach Pitino said in a statement. “It’s not only a great honor, but our team will always remember that they got a chance to visit the White House, understand the logistics of how everything works and then meeting the President.”

Let’s see what this year’s Cardinals did the last time they met a president: 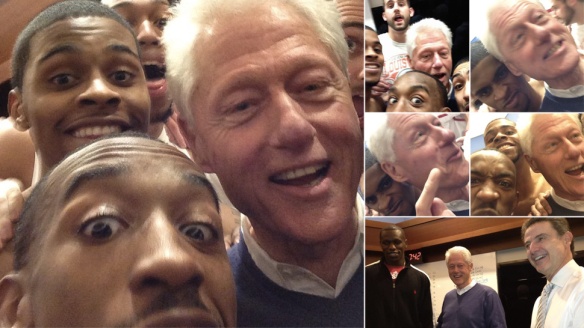 This can be very inspirational, or a disaster. I’m 99 percent sure it will be dignified. But with Russ Smith in the room, you never know what’s going to happen. Just remember, here’s what he did to his coach, Rick Pitino, on national TV:

There must be one or two University of Louisville sports fans out there. If you’re one of them, Forbes magazine took a look at the school’s athletic director, Tom Jurich.

When Jurich took over the program in 1997:

Louisville athletics was a pariah. An organization so

misaligned, so bloated in inefficiency that the very conference it helped form had sued to expunge the university from its ranks. A desperate attempt to prevent the department’s disease of non-compliance from spreading to the other members of the league. There was little hope for Louisville, its faith seemingly sealed as terminal.

In his influential work on organizational management, “Good To Great”, author Jim Collins refers to the circumstances Louisville had fallen into as the “Doom Loop.” The organization lacked internal accountability, failed to achieve credibility within its own community and had lost all authenticity with the college athletics community as a whole. It was not that the department did not want to change, but rather that it lacked the discipline to do so.

The program had one foot in the grave and the other on a banana peel.

For Jurich and his leadership team, part of that process involved confronting the hardest decision a manager must ever make – replacing individuals who did not fit within the cultural boundaries they set out for the department. In fact, within the first five years of tenure, there were more than 130 changes within the staff, or almost 50% of the entire department. Such high turnover is almost unheard of from any organization with the multi-million dollar revenues, and is testament to the dire situation Louisville found itself in.

And it’s biggest problem was it was completely out of compliance with Title IX, a crucial program that stresses the importance of women in sports.

“When it came to non-compliance with Title IX, Louisville was in dire straights,” says Jurich. “We had Lamar Daniel, a leading gender equity consultant, come to campus and tell us that we were the ‘worst program he had ever seen’. Here was someone who had spent over two decades conducting investigations for the Office of Civil Rights and who was practically at a loss for words on just how bad our situation was.”

While the problem Louisville faced was evident, the solution was less clear. At the time, the department’s budget was $14.8 million, or just 17% of the $85 million it had risen to today. Just about every area of the department needed improvement and additional resources. The problem was that not only did the Cardinals need to fund-raise, but also that they needed to invest the majority of the money back into women’s sports, none of which would provide any financial return on investment.

Wow. This place is hopeless.

But the Forbes article details the steps taken to rebuild UofL’s stature in athletics.

So what does the school have to show for it?

Some 15 years after Jurich took over as athletic director, the Louisville Cardinals have made history. The university became the first to win a BCS football game, a national championship in men’s basketball, play for the national championship in women’s basketball, and make the College World Series all in one year. Even more significantly, the University received an invitation to the Atlantic Coast Conference (ACC), a move that all but guarantees stability for many years to come in tumultuous college athletics landscape. For any other university, achieving even one of those feats would be cause for tremendous celebration, but for the University of Louisville, anything less would have been a disappointment.

The article is worth reading. (Though it seems to have dropped a section involving UofL basketball. It makes a reference to Pitino, but no reference to Rick’s first name.) 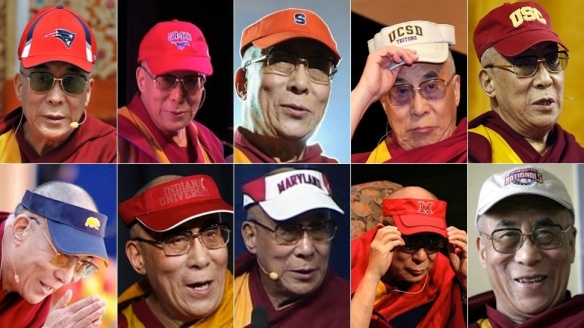 The Dalai Lama is going to be in Louisville on May 19 and 20. I saw him in Washington in 2011, where his profound message was “Don’t worry. Be happy.”

I won’t be in town to hear him say that again at the Yum Center, but I think I got the message the first time.

What I do find interesting, though, is his fondness for sports caps. The collection above is from Deadspin, which describes him as a “giant bandwagoner.”

Well, he’s going to the home court of the NCAA basketball national champions, the Louisville Cardinals. The least someone can do is get him a cap. Preferably one that says “National Champions.” I’ve got a cap from the Final Four that I’d give him, but like I said, I won’t be in town when he’s there.

I’m sure they’ll be generous enought to let him take his pick at the Cardinal Authentic Store. Throw in a football and basketball jersey while they’re at it.

Look at the photo above. He even got a Nats hat when he was in Washington, and the Nats aren’t champions of anything.

So, Louisville basketball coach Rick Pitino said he would get a tattoo if the Cardinals won the national championship.

The Cards won. He got the tattoo:

Here’s the post-tattoo interview from the parlor on Bardstown Road in Louisville.

Louisville Cardinals basketball fans are elated because guard Russ Smith is going to return for his senior year.

Anyone who’s watched Russ knows he can do some amazing things with the basketball. (Look at all the games he led the team in points.) But we also know he can do some amazingly stupid things with the basketball. (Look at the five overtime loss against Notre Dame.) Russ seriously thought about entering the NBA draft, and I’m sure the general managers were looking at the stupid things.

I was at the national championship against Michigan in Atlanta game and screamed “No, Russ!” when Louisville was up by eight with 2:36 left and a fresh 35-second shot clock, and Russ put up a bad shot from beyond the three-point line. All he had to do was hold onto the ball, let the clock run down and set up a play for a better shot. I just kept thinking, “If Louisville loses, this is where it happened.”

Plus, I suspect he also didn’t want to leave Louisville after the disappointing game he had in the national championship. Only nine points, and lots of bad shots, including the one above.

The extra year under Coach Rick Pitino should add a lot more maturity to Russ’s game. And look at the team they’ll have. Three starters returning: Russ Smith, Chane Behanan and Wayne Blackshire. The Final Four MVP Luke Hancock is back. Kevin Ware’s leg will be healed. Two departing starters, but Montrezl Harrell is back at forward or center, and a really good recruiting class is coming up.

And if things go right, Russ gets into his third Final Four, and has a chance to defend the national championship. Put it all together, and that makes him a definite first round draft choice in 2014.

In the meantime, let’s wallow in the 2013 victory, with Dick Vitale and the ESPN America feed out of the U.K.

Here’s a nice little musical mashup of the Louisville basketball championship by VillenHD over at Card Chronicle: