The city on the left is Shanghai, China, in 1987. The city on the right is Shanghai in 2013. It’s like a modest backwater turned into the set of “Blade Runner” overnight. In terms of construction, this may have taken 26 years, but I can’t think of an American city that has changed this much this quickly.

Did you know there are more than 160 cities in China with a population exceeding one million? Can you guess how many American cities exceed one million?

China has a population 1.36 billion. The U.S. population is 317.3 million, less than a quarter of China’s. Still, given the proportion, you’d think there’d be at least 40 American cities over the million mark.

The cities I currently live in, Washington, D.C., and Louisville, rank 24th and 27th in terms of U.S. population. They wouldn’t even make the top 200 in China. Maybe that’s one reason American cities don’t grow as fast.

By the way, Shanghai is China’s second largest city in terms of population, with 27 million people. The largest U.S. city? New York, with a paltry 8 million.

And China’s largest city? The Guangzhou metropolitan area with 44 million. I have no idea where this is. I thought Beijing was the largest city, but it ranks third.

And the embassy would send messages on places to avoid in general (i.e., don’t go to country X. The government has just been overthrown).

But what places in America are foreign governments telling their citizens to avoid? Here’s a list from the Washington Post’s GovBeat column:

Boston: Avoid walking at night in Dorchester, Mattapan and Roxbury, and be wary of “petty crime” in Chinatown, the North End and Fenway.

New York: Be wary in Times Square and at the Statue of Liberty, and don’t go to Harlem, the Bronx or Central Park at night.

Richmond: “Do not visit the city on foot.”

Detroit: “The center is not recommended after the close of business.”

Chicago: Stay away from the West Side and anywhere south of 59th Street.

Houston: Be vigilant if traveling through Downtown, south and east Houston at night.

Atlanta: The French are nervous about the southern part of the city, and downtown after dark.

Miami: “Canadians have been the victims of crime such as break-ins, assaults and pickpocketing in the Miami area, sometimes during daylight hours,” Canada’s foreign ministry warns. France says attacks on tourists in Florida are rare now, but were frequent a few years ago.

El Paso: The British Foreign Office warns tourists about violence along the border with Mexico, and the border crossing at Ciudad Juarez specifically.

Having lived in some of these places, I can say that the folks abroad seem to know what they’re talking about.

What is it with the New York elite and bicycles?

Mayor Michael Bloomberg introduced a bike sharing system to the city, much like Capital Bikeshare in Washington and the bike-share systems I’ve used in a bunch of European cities. The system has been more successful than expected here in D.C. and it’s just considered a way of life throughout Europe.

But the elitists in the Big Apple are treating transportation on two wheels like the beginning stages of a Commie/Nazi siege. Here’s a screed from frontpagemag.com:

Bicycles are one of the obsessions of Mayor Bloomberg and his transportation secretary Janette Sadik-Khan. Khan is the granddaughter of Imam Alimjan Idris, a Nazi collaborator and principle teacher at an SS school for Imams under Hitler’s Mufti, Haj Amin al-Husseini. The bio of his son, Wall Street executive Orhan Sadik-Khan, frequently mentions the bombing of the family home in Dresden and surviving trying times after World War II. It neglects to mention that the times were only trying because their side was losing.

In 1933, Idris wrote a letter asking why Allah would have chosen the Jews, whom he described as, “the most despicable, repulsive and corrupting nation on earth.” It’s hard to say what Imam Idris would have made of his granddaughter marrying a Jewish law professor and peddling bikes that no one wants from a nearly bankrupt Montreal government company.

But considering that Imam Idris was at times accused of being a Soviet agent and did some work for Imperial Japan, it seems likely that he would have understood.

In partial revenge, Khan has made many New York streets nearly as impassable as those of her grandfather’s wartime Dresden. Bike lanes have turned two lane streets into one lane streets. Infidels sit in their cars and honk while bike lanes go unused and midtown bus lanes sit empty except for the occasional daring taxi driver braving the bus lane camera and the 150 dollar fine.

Wow! You’ve literally got Nazis and Commies and the Red Menace, not to mention Muslims and our sinister neighbor north of the border.

Bike sharing makes streets as impassible as wartime Dresden? Dresden streets were impassible because the Allies bombed the hell out of the city.

This is what happened in Dresden:

That is not equivalent to setting up a bicycle stand. The writer of he above piece is nuts, but he’s not the only one who’s gone off the deep end. Here’s a “respected member of the media elite”:

And Dorothy Rabinowitz does not represent the majority of citizens in New York, because the majority aren’t editorial writers for the Wall Street Journal who have car services or chauffeurs picking them up and dropping them off so they don’t have to deal with that little inconvenience called parking, which is practically impossible in the city.

I can’t even imagine what’s going through these people heads. But if bike sharing is the equivalent of communism, fascism, Islamic terrorism and the Allied bombing of a German city, I would move out of New York immediately.

It brings back fond memories of all the subway systems we’ve been on. 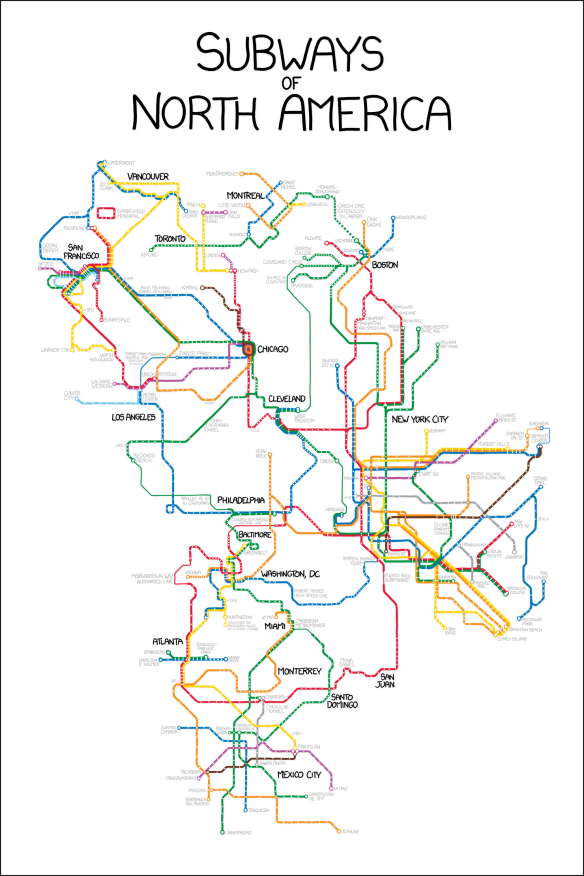 Click on it to get a really big version. From xkcd.com:

As you all know, Coney Island is the famous amusement park on the southern part of Brooklyn, N.Y. I haven’t been there in years. Probably the last time I went was in the 1970s.

But here’s how it looked in 1905, when Miss Knapp took her boarding school girls there for a day trip.

A couple of things.

1) It’s surprising there weren’t a couple of compound fractures when the girls had to jump off of …?? What was that thing anyway? It wasn’t a car. Maybe it was a bus, but when you have to climb a ladder to get on it, that’s a sign it’s too dangerous to ride on.

2) Bathing suits were really depressing in 1905. It’s like having a cop say “Nothing to see here. Move along.”

3) It didn’t take much to excite people at the amusement park. Roll them around in a big wheel. Put them on a large slide. And run a fake race on fake horses and it’s a perfect day. Can you imagine anyone in 1905 riding on a roller coaster?

Like the Cyclone, the classic wooden coaster at Coney Island that celebrates its 86th year in operation this year:

Yoko Ono tweeted this on Wednesday: 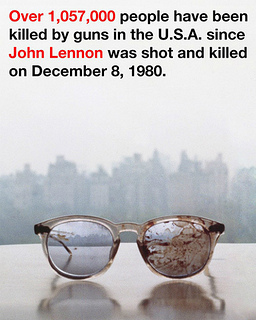 Those are the blood-stained glasses John Lennon wore the night he was shot to death outside his home at the Dakota in New York City.

The death of a loved one is a hollowing experience. After 33 years our son Sean and I still miss him. Yoko Ono Lennon

There’s a heart-warming piece in Thursday’s New York Times by Peter Mercurio that opens with this:

The story of how Danny and I were married last July in a Manhattan courtroom, with our son, Kevin, beside us, began 12 years earlier, in a dark, damp subway station.

I won’t spoil it by excerpting more, but it is worth reading. Or, you can wait a few years, because somewhere in Hollywood, someone is thinking, “This would make a great movie.” Take a look here.